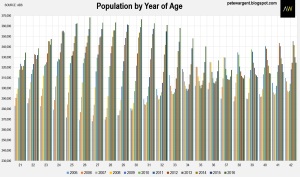 While the census showed Australia overall is aging, there’s been a noticeable lift in the number of people aged between 25 to 32.
As the accompanying graph shows…

Whoa, that is one ugly chart. First thought: let’s not be too hard on Fairfax Media, they’ve sacked most of their real journalists and they took the chart from someone else. Second thought: if you want to visualise change over time, time as an axis rather than a coloured bar is generally a good idea.

Can we do better?
END_OF_DOCUMENT_TOKEN_TO_BE_REPLACED

Generally, I don’t cover “mainstream” science reporting, but this is too poor to let it pass.

Nature Genetics features a fascinating article about the properties of haemoglobin from the extinct woolly mammoth. Briefly, the researchers sequenced DNA encoding haemoglobin subunits from a sample of mammoth bone and compared it with that of modern elephants. They then altered the modern elephant DNA sequence to match that of the mammoth, expressed mammoth and elephant protein in E. coli and compared the oxygen affinity of each protein. Their conclusion: the amino acid substitutions in mammoth haemoglobin result in an enhanced ability to release oxygen to tissues at low temperature.

You will not find the words “anti-freeze” anywhere in the article. Bear that in mind, as we survey the reporting of this story by various news outlets: