Highcharts has long been a favourite visualisation library of mine, and I’ve written before about Highcharter, my preferred way to use Highcharts in R.

Highcharter has a nice simple function, hcboxplot(), to generate boxplots. I recently generated some for a project at work and was asked: can we see how many observations make up the distribution for each category? This is a common issue with boxplots and there are a few solutions such as: overlay the box on a jitter plot to get some idea of the number of points, or try a violin plot, or a so-called bee-swarm plot. In Highcharts, I figured there should be a method to get the number of observations, which could then be displayed in a tool-tip on mouse-over.

First, you’ll need to install highcharter from Github to make it work with the latest dplyr.

Next, we generate a reproducible dataset using the wakefield package. For some reason, we want to look at age by gender, but only for redheads:

Giving us 62 male and 48 female redheads. The tibble package is required because later on, our boxplot function calls the function has_name from that package.

The standard hcboxplot function shows us, on mouse-over, the summary data used in the boxplot, as in the image below. 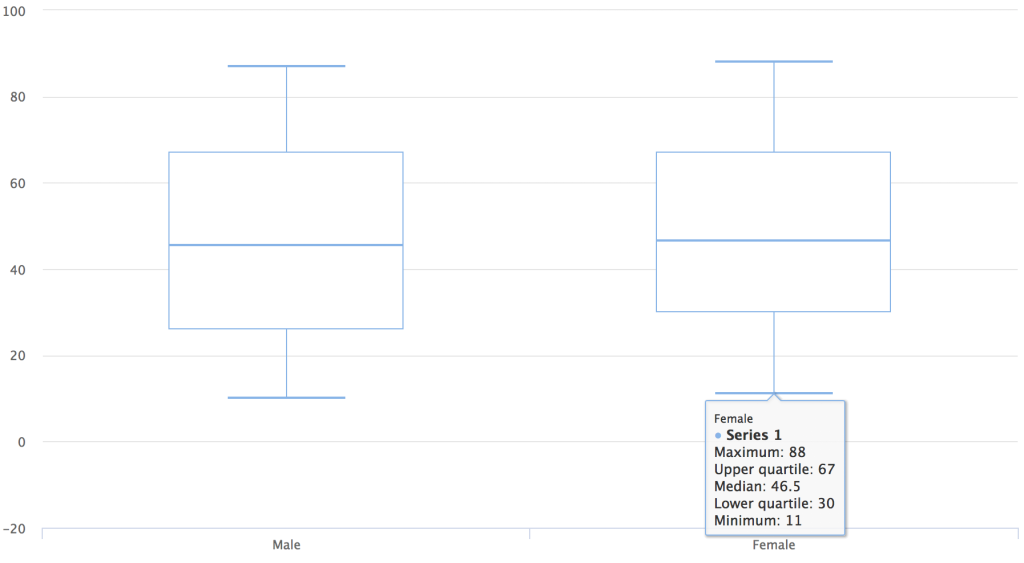 To replace that with number of observations per group, we need to edit the function. In RStudio, View(hcboxplot) will open a tab with the (read-only) code, which can be copy/pasted and edited. Look for the function named get_box_values, which uses the R boxplot.stats function to generated a data frame:

Edit it to look like this – the new function just adds a column obs with number of observations:

Save the new function as, for example, my_hcboxplot. Now we can customise the tooltip to use the obs property of the point object: