PeerJ, like PLoS ONE, aims to publish work on the basis of “soundness” (scientific and methodological) as opposed to subjective notions of impact, interest or significance. I’d argue that effective, appropriate data visualisation is a good measure of methodology. I’d also argue that on that basis, Evolution of a research field – a micro (RNA) example fails the soundness test.

Let’s start with Figure 1. Equally spaced divisions on the x-axis, but the years are not equally spaced – 1993, 1996, 1997 for example. Even worse is the attempt to illustrate a rapid increase after 2004 using broken bars and a second y-axis. It’s confusing and messy.

Some of these crimes are repeated in Figure 2, which also introduces an ugly shading scheme to distinguish languages. When you look at it, do you think “black…aha, black = English” ? No, you do not. There’s no need for different shading or colour here (it’s not even visible for two bars); the bars are readily distinguishable from the x-axis labels.

Figure 3 repeats the shading crime and Table 1 is somewhat superfluous, as it contains much of the same data. Several more tables follow, containing data which might be better presented as charts. 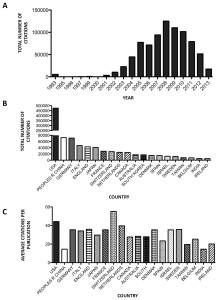 Figure 4: all the previous horrors

Figure 4 combines all the previous horrors into 3 panels. We could go on, but let’s not. You can see the rest for yourself, it’s open access.

Publication on the basis of “soundness” need not mean sacrifices in quality. Ideally, someone at some stage in the process – a mentor before submission, a reviewer, an editor – should notice when figures are not produced to an appropriate standard and suggest improvements. I see a lot of failures like this one in the literature and the causes run right through the science career timeline. It starts with poor student training and ends with reviewers and editors who don’t know how to assess the quality of data analysis/visualisation.

3 thoughts on “Note to journals: “methodologically sound” applies to figures too”