I thought nothing could top the classic “6-way Venn banana“, featured in The banana (Musa acuminata) genome and the evolution of monocotyledonous plants.

That is until I saw Figure 3 from Compact genome of the Antarctic midge is likely an adaptation to an extreme environment. 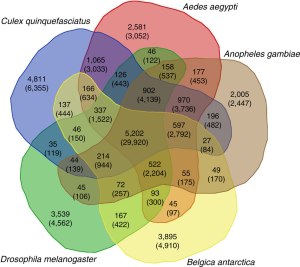 What’s odd is that Figure 2 in the latter paper is a nice, clear R/ggplot2 creation, using facet_grid(), so someone knew what they were doing.

That aside, the Antarctic midge paper is an interesting read; go check it out.

This led to some amusing Twitter discussion which pointed me to *A New Rose : The First Simple Symmetric 11-Venn Diagram.

[*] +1 for referencing The Damned, if indeed that was the intention.